The Script: Make Yourself At Home

I’ll write a script for a solo. The solo is about the worries of a person, killing time in their house during the lockdown. The lack of action, physical interaction and expectations is slowly but surely taking its toll. The script describes in painstaking detail what the performer should do and especially how. Action, text, movement, tempo, mise-en-scène and film framing, everything is thorough and detailed. I send the script to six performers of different age and gender. They’ll learn the solo on their own at home, exactly as described. There is no mutual consultation. Ambiguities in the script have to be solved by the performers themselves. But if there are ambiguities in the script, they are probably deliberate. The six ‘identical’ solos will be performed, filmed and live-streamed at the same time. The Script: Make Yourself at Home will show the uncertain, absurd, ordinary and lonely situation most of us are in right now. 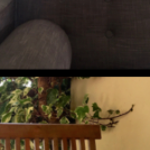