Vernis starts with a seemingly scientific selection method. Dozens of candidates signed on. They do not know what for, but that doesn’t matter. They want to be chosen.
The candidates go through different mental trials and physical tests; they draw a self-portrait, do push ups, loose themselves in associative word games and motivate their personal object.
Eventually four candidates are being selected for a social psychological experiment about the short-term memory.

After the video film the lights on the floor go on and the selected participants are entering the theater. A voice over explains to the participants what the rules are.
They can do anything within the marked out square, but every time they hear a ‘beep’ they have to repeat whatever they were just doing. Cameras and microphones are registering everything. They are not allowed to leave the experiment before time and they have to try to be themselves as much as possible.
The experiment begins.

Through the repetition the participants are getting conscious of how unconscious they actually move or behave. The lack of a specific goal and the fear to do something wrong leads up to forced behavior and uncertainty. All spontaneity in their being is gone, mostly because they are hyper conscious of the fact that they’re being watched. The result is that these so-called normal people have more and more difficulties to be themselves. In less then no time they chance into actors who play themselves.

‘With an unfailing flair and sense of humor the intension is made clear: an exceptional and vicious vision on the presentation culture. A culture in which being seen is more important then saying something worthwhile. And where individualism reaches its purpose in front of a camera.
The sober registrations, manipulative camera shoots and the unexpected dramatic lines of music under the apparently objective images, lift the film to a level of criticism.’ (De Standaard, March 2004)

‘A theater company, which has an averse to any melodrama, is Kassys. Each sentiment is banished and only then drama gets a beautiful chance’. (NRC Handelsblad, June 2004)

‘It is the collective self-humiliation you can see at Idols too. The result is that so-called ordinary people can chance to be a star in no time. The result is splendid minimal theatre.’ (Rotterdams Dagblad, October 2004)

‘The quality of Vernis is that the viewer gets aware all over about the codes and rules which apply to watching theater and making theater.’ (Leidsch Dagblad, November 2004) 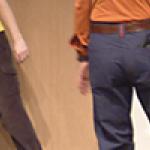