Baas Slaat Man (Boss Hits Man) starts with the fake documentary ‘The Making Of Baas Slaat Man’. Cameraman Patrick Minks follows the director and the four actors from the first introduction to the premiere night.
He overhears talks, is present in the rehearsal studio and has a so-called approval to film everything behind the scenes.
Intimidation, gossip, black mail and other nasty behavior during the rehearsals are revealed in the film.
After the documentary the four actors enter the stage from the dressing room. With a huge dose of manipulated background information the live part starts.

The live part is also a sort of documentary. With a voice over of Loretta Schrijver (famous Dutch voice) we follow the group as if it concerns an episode of National Geographic.
Lorreta: “This is our group; healthy, strong and impressive. We will follow them and see how these wonderful creatures life and learn together.”
In a 120m2 territory (the stage), the group is let loose. We observe them, during their daily routine. How they behave when they feel unwatched, driven by the laws of the ‘jungle’.
Loretta: “A territory is for all the member of vital importance. Here they go for a stroll, they practice their skills, store a lot of information and develop a tight alliance.”

Pecking order and internal relationships determine their behavior and actions. Whether they put up with one another depends on the circumstances. Sometimes they're ruthless.
Loretta: “It looks impressive but will be over soon.”

Baas Slaat Man was nominated for the VSCD-Mime award 2001.

‘A remarkable performance showing life as it is in a broadcast on National Geographic, only now set in the urban jungle of daily routine. Non-verbal, very well choreographed, slow and hilarious.’ (De Morgen, October 2001) 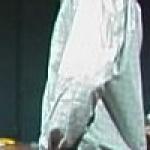 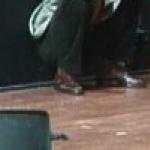 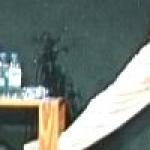 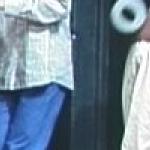 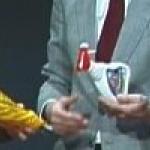